On the 26th of April, 1986, the Chernobyl Nuclear Power Plant caught fire resulting in one of the most devastating nuclear incidents the world has ever seen. The USSR denied anything was wrong until a nuclear power plant in Sweden picked up irregular radiation readings. 36 hours after the initial explosion, the government ordered the evacuation of the city of Pripyat and a 30km exclusion zone was established. This zone remains in place today with strict rules surrounding entry. Nature has started to reclaim much of the area that is very much left as it was in 1986. It’s an astonishing place to visit. (Read more about the abandoned city of Pripyat here).

Standing with the Chernobyl Nuclear Power Plant behind me.

You are permitted to enter the Chernobyl Nuclear Exclusion Zone but there are strict rules around visiting. Once you follow the rules and stay with your guide, you should be safe. Lots of people worry about the level of radiation but a short visit won’t cause any issues. The typical radiation exposure you experience on a Chernobyl tour can range from 130 to 2610 microsieverets per hour, or the equivalent of a long haul flight.

This is the basketball court in the city of Pripyat

The swimming pool in the city of Pripyat.

These are the rules that anyone entering the Chernobyl Nuclear Exclusion Zone must abide by:

You actually get quite close to reactor 4 where the explosion took place. Nowadays, it’s covered by the New Safe Confinement Shelter but you can stand about 50 metres away and it’s safe to do so. It covers the original confinement unit built by the liquidators after the disaster.

This is how close you can get to the nuclear power plant. The New Safe Confinement Unit completely covers reactor 4.

The only statue of Lenin still standing in Ukraine is in the zone. It can’t be removed or demolished so it remains in situ and is a popular stop on tours. Ukraine became independent from the Soviet Union in 1991.

The Duga II radar is also within the zone. It’s a massive installation that was used to detect incoming long range missiles during the Cold War. It’s affectionately called The Woodpecker because of the noise it gave off on radio scanners.

Of course, the main attraction is the city of Pripyat which was evacuated in just 90 minutes in 1986 because of its novel design. It was planned as a Soviet city of the future with good access and wide avenues which made the evacuation very simple.

A street in Pripyat.

The entrance to a school in Pripyat. 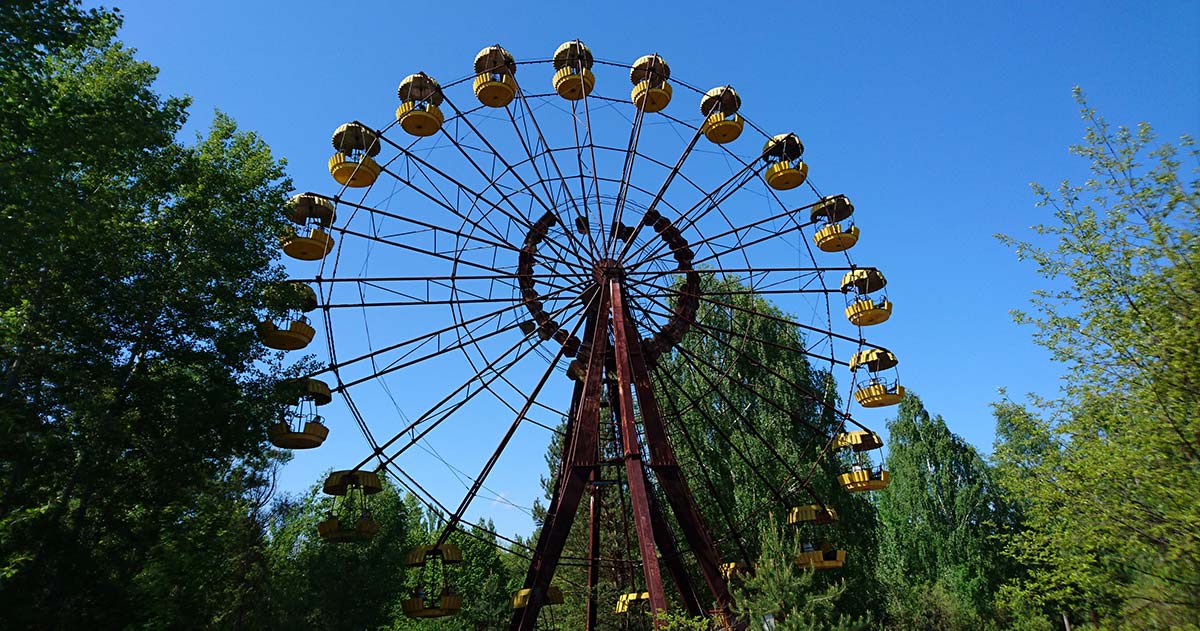 The infamous ferris wheel in Pripyat

Visiting Chernobyl is probably one of the most amazing travel experiences I’ve had. I would highly recommend seeing what it’s like for yourself. Pair it with a trip to Kiev, a city with a lot of surprises and wonderful people.

This website uses cookies to improve your experience while you navigate through the website. Out of these cookies, the cookies that are categorized as necessary are stored on your browser as they are essential for the working of basic functionalities of the website. We also use third-party cookies that help us analyze and understand how you use this website. These cookies will be stored in your browser only with your consent. You also have the option to opt-out of these cookies. But opting out of some of these cookies may have an effect on your browsing experience.
Necessary Always Enabled
Necessary cookies are absolutely essential for the website to function properly. This category only includes cookies that ensures basic functionalities and security features of the website. These cookies do not store any personal information.
Non-necessary
Any cookies that may not be particularly necessary for the website to function and is used specifically to collect user personal data via analytics, ads, other embedded contents are termed as non-necessary cookies. It is mandatory to procure user consent prior to running these cookies on your website.
SAVE & ACCEPT