The Top 10 Attractions at PortAventura Park

PortAventura World is an entertainment resort in Salou, Spain made up of two theme parks, a water park, six hotels, a convention centre and an RV park. It’s about an hour south of Barcelona and only 15 minutes from Reus Airport.

The main theme park, PortAventura Park, opened in 1995 and is the busiest theme park in Spain and the 6th busiest in Europe. It has 6 themed lands – Mediterrània, Polynesia, SésamoAventura, China, México and Far West. A second theme park, Ferrari Land opened in 2017 and is home to the fastest and highest roller coaster in Europe – Red Force.

PortAventura is perfect if you’re staying nearby and you could easily do two days and visit both parks. If you’re just doing one day, do PortAventura Park. There’s not a whole lot to do in Ferrari Land yet but they continue to expand it. Be aware too that it can get very hot in the Summer months and like most theme parks, there’s a lot of standing in queues. It can be really busy in the Summer too when a lot of Europeans visit the surrounding areas on holidays.

It might be worth considering staying onsite at one of the six hotels – Hotel El Paso, Hotel Gold River, Lucy’s Mansion, Hotel PortAventura, Hotel Caribe and the new Hotel Colorado Creek. They’re close to both parks and you get benefits like early ride time.

Another thing to consider is an express pass. For an additional fee, you can skip the lines which is especially helpful in the busy Summer months. The Express Max pass gets you on everything once without queuing and costs €34.

Just as a foreword to the top 10 attractions list; I’ve not included Ferrari Land because I’ve not been there yet. I’ve also not included any of the children’s attractions because I don’t have kids. Suffice it to say, there’s lots to do for younger kids, especially if they like Sesame Street!

A ride where the primary objective is just to fire a water gun. Angkor consists of a slow moving boat ride through the remains of a jungle where you, aimed with your trusty weapon, must shoot at anything that moves. That includes riders in other boats. It’s all fun and games until some little shit decides it’s only hilarious to soak you to the bone. Saying that, the whole Angkor Wat theming is pretty decent. 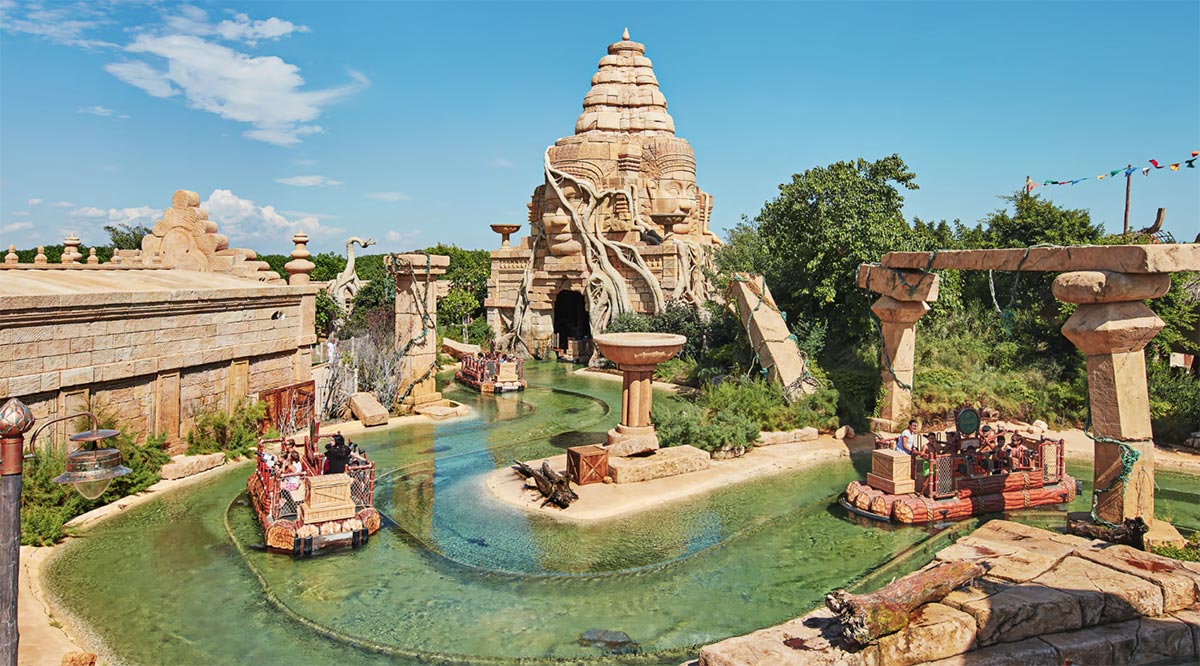 I LOVE a good rapids ride. Congo River Rapids in Alton Towers and Kali River Rapids in Disney’s Animal Kingdom are probably my favourite. Grand Canyon Rapids in PortAventura is exactly that. Grand. Sure look, it’s something to pass the time. Situated in the Far West section of the park, the ride is themed around a trip down the Colorado River through the Grand Canyon. That theme is being expanded to the new Hotel Colorado Creek which has just opened.

El Diablo is what some in the business would call a “kiddie coaster” and I’m sure kids would love it but for adults who are a little less enthusiastic about some of the big coasters in PortAventura (and there are BIG coasters in PortAventura,) this is a good starting point. It’s based around an old abandoned mine in Mexico (which is good considering it’s in the México section). It’s not too fast or twisty so you won’t lose your lunch. El Diablo – Tren de la Mina is a lot of fun and while not the most exciting thing in the park, is worth it if the queue is not too long.

Furius Baco is the only ride located in the Mediterrània section of the park and is themed around a machine that an inventor builds to collect grapes, however a monkey tampers with it and you’re sent flying around the track. It was the fastest roller coaster in Europe when it was launched in 2007 and features wing rider seating, which means you’re hanging from the side of the track. It sticks pretty low to the ground and includes one long inversion. The launch is really intense and I felt the whole ride a little uncomfortable to be honest so once a day on Furius Baco is more than enough!

Back to the Far West area and the Silver River Flume. This is really fun and one of the best flume rides I’ve been on. That being said, flumes seem to be going out of fashion a bit and both Alton Towers and Thorpe Park have closed theirs. Maybe it’s the British Weather? The Silver River Flume has some great drops and fun theming, and you don’t get drenched. I’m a fan of water rides where you get wet, but not drenched. 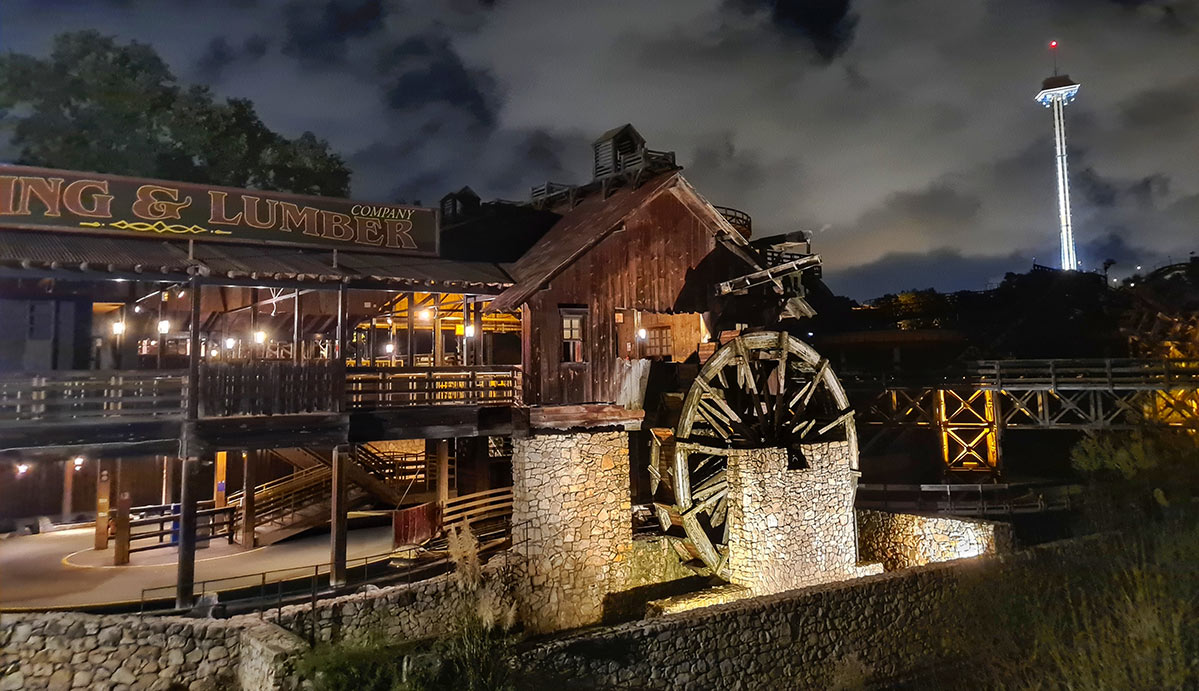 Silver River Flume – sit at the back and let those in front of you get soaked!

Wooden roller coasters seem to be all the rage lately but Stampida, located in Far West, was opened back in 1995. It’s the only duelling wooden roller coaster in existence, with two separate tracks – Red & Blue. Both start together and climb the lift hill and then head off in different directions before coming back together to race to the finish. There’s some near misses and the duelling element works really well. Make sure you try both colours if it’s not too busy because both tracks are a little different.

Huraken Condor is one of the tallest drop towers in the world at 100 metres high. What makes it special is the fact that each side has different configurations so you can sit regularly, sit tilted forward or stand up. They basically just lift you into the air and then drop you. All very intense. It’s themed around an Aztec ritual and that’s done really well. I’m not really a massive fan of drop towers but this one is probably the best I’ve done. 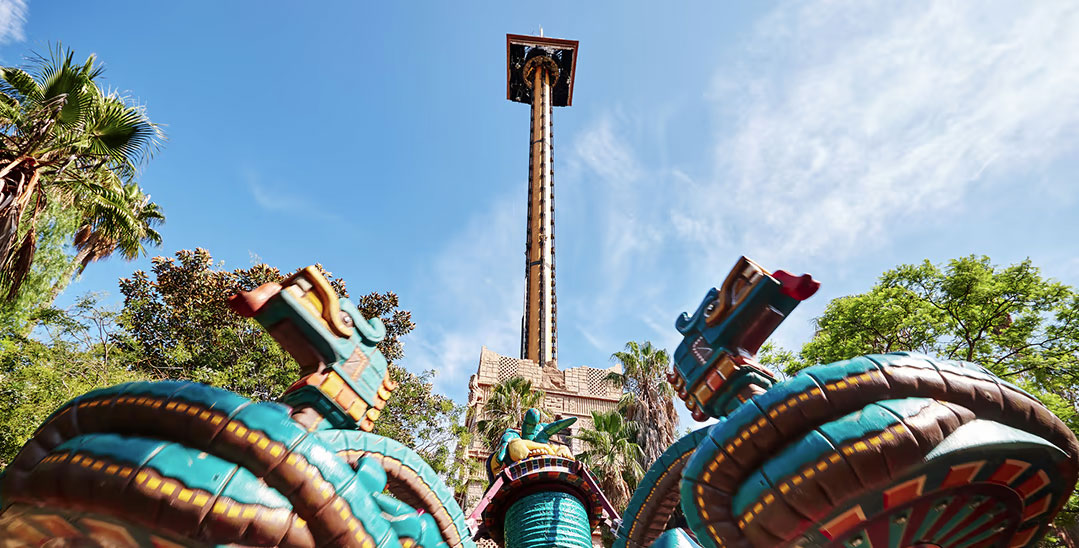 Just don’t puke at anyone from this height!

Now this is a water ride! Tutuki Splash is in the Polynesia section of the park and is themed around a volcano. You start off with a gentle river ride before a small drop, then you’re taken up the lift hill. This is where things can get very wet! Depending on the timing, if another boat is splashing down as you’re going up, you can get absolutely soaked! I’ve been on it where I came off saturated and other times where I’ve come off bone dry. It’s all in the luck of the draw really. The final splash down is great fun and Tutuki Splash is one of my favourite water rides I’ve been on. 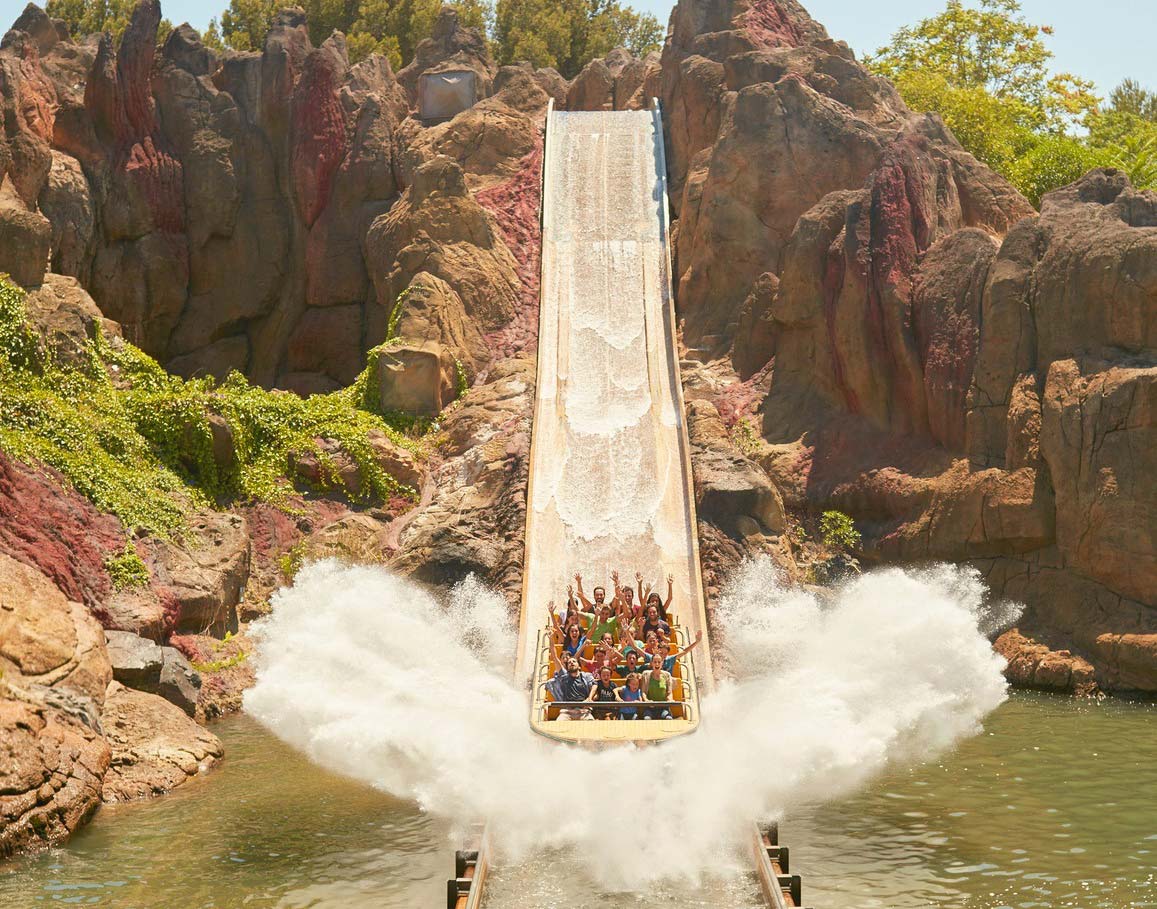 Pro tip – You get less wet on the left side of the boat!

When Dragon Khan opened in 1995, it had the most inversions of any roller coaster in the world, with a total of eight. It retained the record until 2002 when Colossus opened in Thorpe Park. That record was later beaten by The Smiler in Alton Towers. Dragon Khan is located in the China area of the park and runs underneath Shambhala. It’s an intense ride and you feel the inversions so it’s probably not for you if you’re of a nervous disposition. If you like roller coasters though, it’s a must.

Shambhala is one of my favourite roller coasters in the world. It’s 76 metres tall and hits 134 kmh! it was the tallest roller coaster in Europe until Red Force opened next door in Ferrari Land in 2017. Its full title is Shambhala: Expedición al Himalaya which is apt because it’s themed around an expedition into the Himalayas. There’s no inversions but there’s massive hills giving you great airtime and it goes over Dragon Khan a couple of times! You can’t go to PortAventura and not go on Shambhala. Simple as!

1 thought on “The Top 10 Attractions at PortAventura Park”