A Short Break in Paris 🇫🇷

I’ve been to Paris four times and after each visit, I come home wishing I could have had more time to fit everything in. It’s simply bursting with things to do. One of the world’s great cities and the centre of a former imperial power, Paris is rich in history, tradition and culture. 30 million visitors each year descend on the City of Lights and it’s not hard to see why. It’s a tourist’s city, with something to see or do around every corner. It’s seeing the streets you’ve seen in movies, the monuments that are instantly recognisable, the stories you’ve heard so many times – The Hunchback of Notre Dame, Phantom of The Opera, Les Miserables, Moulin Rouge, Ratatouille, that scene from Superman 2. I could visit Paris every month and still be eager for more.

Charles De Gaulle is the main airport in Paris and we flew there with Aer Lingus from Dublin. There’s a direct route from Cork too. I find CDG easy to use because the RER train takes you directly to Gare Du Nord station. Orly is the city’s second airport but there’s no direct train route into Paris so it’s a little bit of extra hassle. Beauvais is Ryanair’s base in Paris, however it’s about an hour away on a coach. I would recommend that if you can fly to Charles De Gaulle, do. Alternatively, there are amazing train services to Paris from lots of places in Europe. There’s the Eurostar to London and high-speed lines to other cities in France as well as neighbouring countries like Belgium, Spain, Germany etc.

I’ll start by saying that beyond doubt, my favourite place to visit in Paris is Disneyland. There’s something really magical about it being in the heart of Europe where many of the stories we grew up loving were based. I’ve been to Disneyland each time I’ve been to Paris and instead of going on about it here, I’ll save it for a later blog post. Do go though. You’ll love it!

Finding somewhere decent to stay in Paris can be hit and miss. If you stay too far out of the city, you can end up spending half your day on the metro. The hotels near the sights can be a little bit expensive or have rooms that are incredibly small. What I would recommend you do is have a good look around sites like Booking.com or TripAdvisor and work out what’s best for you. We stayed at the Avalon Appart’Hotel and found it to be reasonably priced and in a brilliant location. It was within walking distance to Montemarte and literally across the road from Gare Du Nord, perfect for getting the Metro and then later, the train to the airport.

The food in Paris is AMAZING but you knew that already right (you watched Ratatouille). We found a really lovely little place in Les Halles called Le Bon Pecheur that I would totally recommend. Their salted caramel tiramisu did magical things to me. I’m tempted to fly there now to get some. We found lots of nice restaurants and most were reasonably priced. Stray a little bit from the tourist spots though. I’m sure the waiter in a place we went to beside Notre Dame was wearing a mask, he charged us so much. I was almost tempted to ring Mastercard to complain about fraud. I’m a big fan of the crepes they sell from the stalls around the city. They’re perfect to eat as you stroll around, taking it all in, especially in the evening.

I made this picture of The Eiffel Tower black and white so it would look like the IKEA picture in my living room.

Night time in Paris is stunning. They don’t call it the City of Lights for nothing. The Eiffel Tower is fantastic in the dark and every hour, on the hour, it shimmers with thousands of little lights for five minutes. Going to the top of the Eiffel Tower is one of those things they say everyone should do once in their lives and I would say that if you’re visiting Paris for the first time, do it! There can be long queues, sometimes an hour or more long, especially in Summer, but when you get to the top and look down on the city below, you’ll realise it was worth it.

The Eiffel Tower glimmers for five minutes on the hour, every hour. MAGIC!

Another must-see is Notre Dame Cathedral. It’s located on Île de la Cité which is the island on which Paris began. It gained worldwide notoriety because of the infamous Victor Hugo book and it’s easy to see how it made such an amazing setting for one of the biggest selling novels of all time. It’s beyond amazing. From the gargoyles and statues that adorn the building outside to the intricate stained glass inside, Notre Dame is a work of art that was started in 1163!

Quasimodo is in there somewhere. 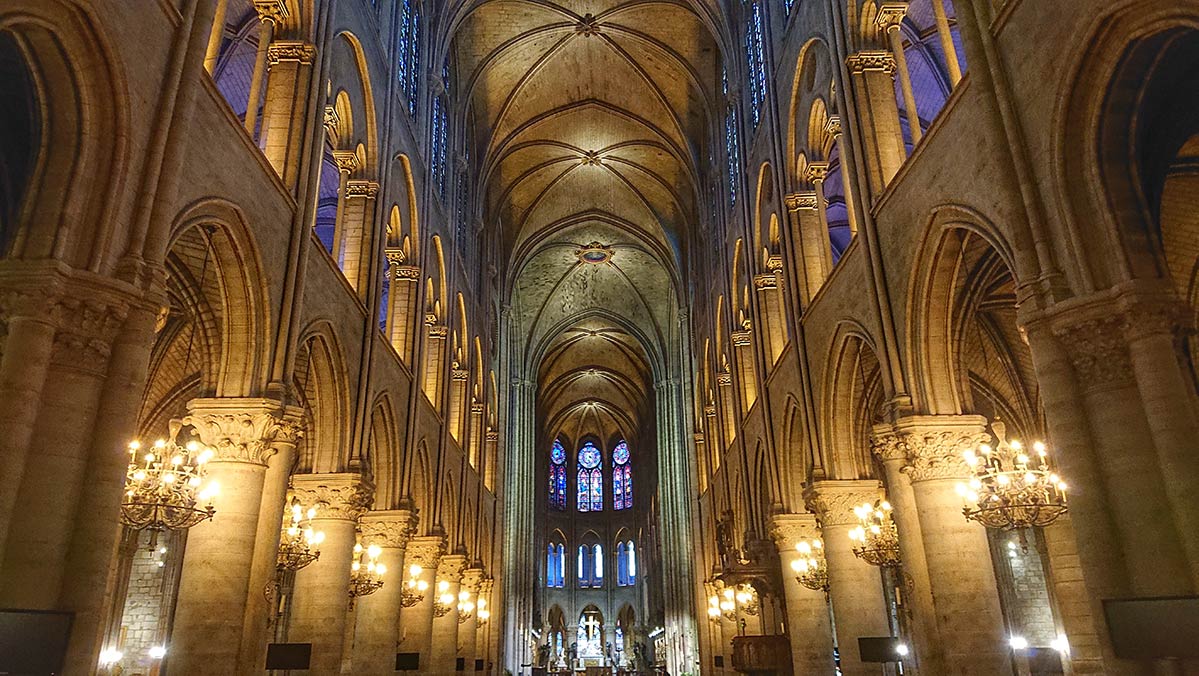 Inside Notre Dame – Do not shout SANCTUARY when you walk in!

The Louvre is probably the world’s most famous museum and was recently the scene of all sorts of shenanigans in Dan Brown’s The Da Vinci Code. The building itself is a work of art and was once home to the French kings. They say you’d need a week to see everything properly and I can vouch for that. We took everything in at a brisk enough pace and I was shattered after our 6 hour visit. There’s a LOT to see and even though I’ll freely admit to not being a great art admirer, I still really enjoyed it. The Venus De Milo and Mona Lisa are probably the most famous pieces in the collection (how very arty of me!) and they can both be a little busy in terms of crowds. Shove your way in for a good look.

The Venus De Milo – Reward offered for the return of her arms.

One of my favourite areas of the city is Montemarte. It’s where the great artists once lived and worked. The Basilica of the Sacré Cœur sits on top of a hill overlooking the city (there’s a LOT of steps up to it so take the funicular) and the view from the top is amazing. The Pigalle area is nearby with more sex shops than you can shake a whip at and the infamous Moulin Rouge. It’s actually a great area to stroll around at night as long as your vigilant and don’t stay too late. 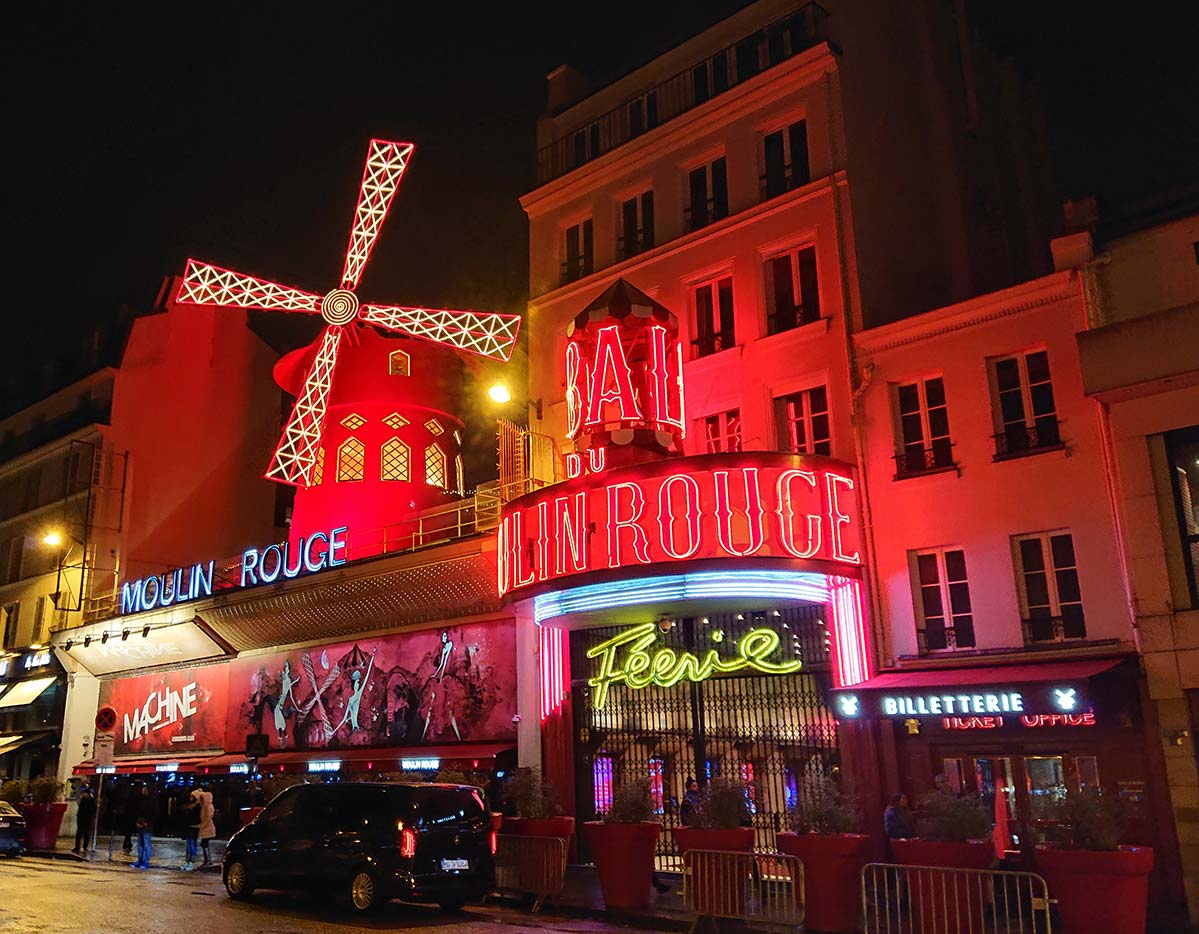 Ladies and Gentlemen – Welcome to the Moulin Rouge!

One of the hidden gems that we stumbled across by accident was Le Manoir De Paris. It’s a horror attraction featuring live actors bringing you through scenes from the history of Paris. You meet the Hunchback, the Phantom, the Man In The Iron Mask and some other people I didn’t really know about (that reminds me, I’ve to look them up on Wikipedia). Paris has some pretty grim tales and they’re brought to life really excellently at Le Manoir De Paris. Be sure to tell them you’re an English speaker when you’re paying and all the actors will speak to you in English. It was a real fun experience and I’d totally recommend it. 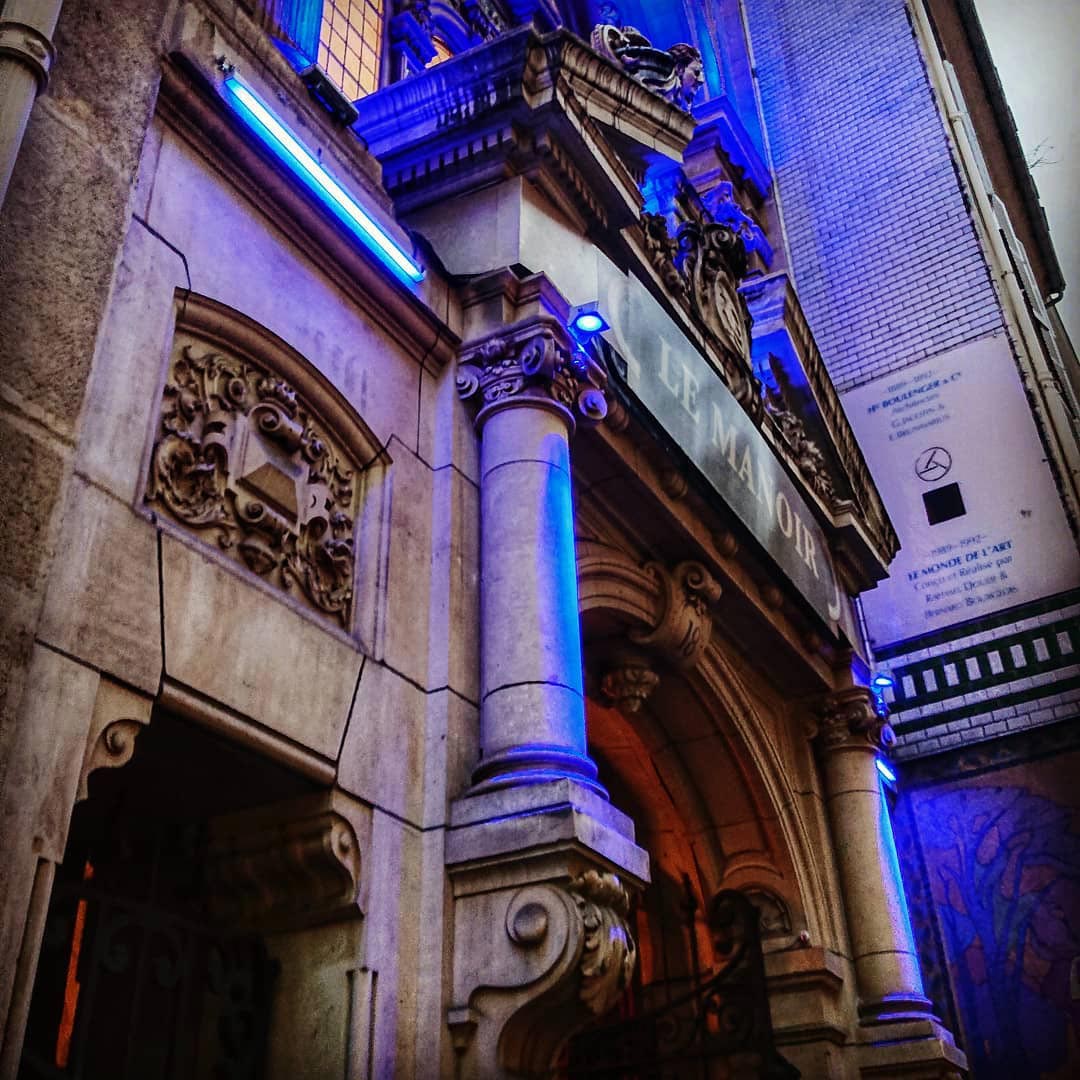 Le Manoir De Paris is home to all sorts of ghoulish creatures. And that’s just the tourists.

As I said at the beginning, it’s really hard to fit everything in when you go to Paris so a boat trip on the Seine is a great way to see lots of the city. Bateux Mouches is probably the most famous of the companies offering Seine cruises and are located on the opposite side of the river to the Eiffel Tower. It can get really cold in Winter though so bring a nice warm hat.

Awkward moment when I captured the OTHER Seine River Cruise company in my picture instead of the one I was on! #NotAnAd

There are so many other wonderful sights to see in Paris – the Palace of Versailles, the Catacombs, the Luxembourg Gardens – but as I said at the very beginning, it’s just really hard to fit it it all in. It’s a city full of familiarity, and yet surprises around every corner. It will keep giving until you return, asking for more. Everyone should see it in real life at least once in their life, however it’ll become clear pretty quickly that once is never enough.

2 thoughts on “A Short Break in Paris 🇫🇷”